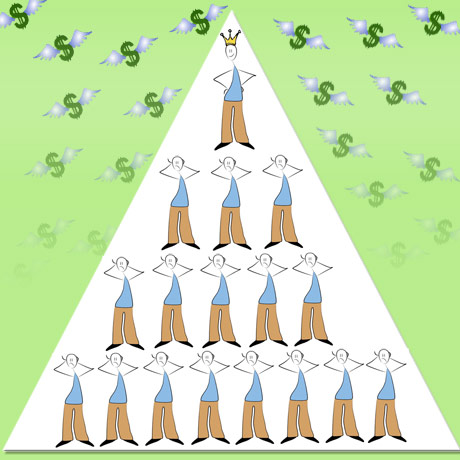 Yeah, I did it. And no, I’m not sorry. Now that the “ponzi schemes” have gone belly-up and their founders are facing more criminal charges than Dudus and Bernie Madoff put together, many people have come forward to pontificate about the greed of the persons who invested in them. They heap scorn on the naiveté of investors who believed that rates of 10% per month were endlessly sustainable and they make it seem as if even a retarded six-year old should have known these schemes would fail. Well, I’m no child, I’m a hardworking man who invested in what seems to have been crap, and I lost my shirt. But hold on, I’ve thought it through and I’m satisfied that I made a reasonable decision based on the facts that were available to me. Lemme tell you why investing in a ponzi scheme made perfect sense at the time…

All my friends were doing it: Stop right there. I can already hear some of you saying: “If your friends were jumping off a cliff, would you jump off a cliff too?” Damn right I would; especially, if those friends were jumping off that cliff and driving back up to the top in brand new Range Rovers! My friends are intelligent, well-educated people and some of them even had training in business and finance. The fact that people I knew were investing in the schemes and were, to my certain knowledge, making good money from them, carried a lot of weight with me. In other words, it’s one thing for someone to simply tell you they’re investing in something that pays 10% a month - it’s not unreasonable be suspicious of that - but it’s quite another thing for your best friend to drive the US$50,000, diesel-fuelled, leather-and-wood-trimmed evidence of that investment to your house and park it at your gate. One look at that and “red-eye” will do the rest.

I did the math: You heard right; I did the math. Am I saying that I worked it out and I recognised the lunacy of the fact that at 10% per month compounded, I would have been richer than Bill Gates in ten years time? Yep. But those aren’t the calculations that matter. I did the math where I calculated that based on our current combined salary, it would have taken me and my wife, with promotions and pay increases, another five years to make a downpayment on the house in Hope Pastures we wanted. It would have taken us another twenty-five years to pay off the mortgage on that house. (By which time, the way things are going, Hope Pastures would probably look like the ghetto we were trying to get away from in the first place. But that’s another story.)

I also did the math where I would have to wait another year before I bought the brand-new-second-hand Honda I wanted because my wife was planning to do her MBA and we couldn’t afford tuition plus car payments. And I did the math where if we save diligently and don’t take any holidays for the next ten years we should just be able to pay our daughter Tamara’s tuition fees if she gets into UWI. (Assuming she’s not stupid enough to go and do something expensive like medicine. And she better not even think about studying abroad). So that’s my math. Now imagine the math for a barber who lives in a rented house in Portmore and takes the bus to work everyday? Once you’ve done those calculations I suggest that you re-do them, plug in 10% a month, and see where you come out. In essence, most of the people who invested in these schemes, including myself, did the math and decided that we’d take a calculated risk by placing our money with them. Everybody else was just greedy.

How the heck should I know 10% a month is unreasonable? I’m not a banker goddammit. And I’m not Warren Buffett either. I have a vague notion that my savings account pays a yearly interest rate somewhere in the single digits. If you offer me 10% a month I’m gonna take it, and I would’ve taken 25% a month too. I only took what the regular financial institutions offered because I figured I couldn’t do any better. I had no concept that 10% per month was somehow unsustainable. Far from being unsustainable, word on the road was that the traditional financial institutions had been making similar returns all along, were keeping the bulk of it for themselves, and were giving customers a “smalls” out of it. The schemes were talking about making “above average returns” from mysterious things like “leverage” and “margins”. My bank was talking about savings accounts and giving me a free diary at Christmas.

People ask me how I could put my money in an entity when I didn’t know what that entity did with the money. Well, guess what, I have no idea what my unit trust/credit union/securities dealer does with my money either. They could be playing Lotto with it for all I know, or funding an underground cock-fighting ring for that matter. As long as they pay me a reasonable return, I really don’t care.

I was able to get my money out, so I put some more in: Contrary to what the radio-talk-show-experts may think, I did what any prudent investor would do when faced with a new investment. Firstly, I discussed it with my advisors (read: bredren dem). Then I calculated the likely return (read: roughed out some numbers on the back of a paper napkin). I also did some background checks on the persons running the scheme (read: spoke to my second cousin who went to primary school with the guy who started the scheme).

Having done that, I invested a small amount of money; no more than I felt comfortable losing. Then I monitored my investment closely. My statements came regularly and my investment grew like love bush in an untended yam field. As my money grew, so did my confidence. But I remained cautious. Finally, after a year or so, I decided to withdraw some of the interest earned to see if there were any problems. There weren’t any. I requested my money and collected a cheque a few days later. A week after that I took a shopping trip to Miami with the wife and kids. A few weeks after that, I took a shopping trip to Fort Lauderdale with my girlfriend and her kids.

Of course I trusted the so-called schemes! They’d kept my money safe, grown it handsomely, and had given it back to me in a timely manner. Like a repentant sinner at a tent crusade I was converted to the gospel of forex trading!

The schemes looked legit: Some schemes sent monthly statements. Others allowed investors to check their statements on-line. One or two of them even had had nicely appointed offices with attractive staff members falling over themselves to do your bidding. In other words, the schemes ran what seemed like legitimate, professional operations. And that was just their operations. Their PR/marketing was even better. While other financial institutions were fretting about whether the schemes were legal, the schemes were busy sponsoring soccer leagues, beauty pageants, jazz festivals and generally winning hearts and minds. The traders at the schemes were held in such high esteem that it was being suggested that they be invited to manage the nation’s finances. As any politician or televangelist can tell you, image is everything and style always trumps ‘substance’.

I thought I could’ve gotten out in time: The warnings were getting louder. The regulators were naming names and placing full-page ads about the schemes in the newspapers. Talk on the cocktail circuit (that I was now finally apart of) was that so-and-so had just pulled US$10M from the scheme and that the FBI/CIA/SEC was asking questions. Traditional financial institutions were screaming bloody murder. I, on the other hand, chalked it all up to “fight gainst”, “bad mind” and a “conspiracy to hold down poor people”. I was baffled by all the negativity and pessimism directed at the schemes. If Jamaica could produce the best sprinters in the world why couldn’t we also produce record-breaking forex traders too? Some people were seeing clouds gathering on the horizon and were getting nervous. Not me. No sir, I was giving it another six months. I figured that in six months I would have earned enough to pay off my credit card bills and buy that Honda (I was guessing that there wouldn’t be enough time to get the Range Rover). As it turns out, I overestimated the longevity of the scheme by about… six months.

I wasn’t convinced traditional financial institutions were as safe as they’re made out to be: Telling me I should have put my money in “safe” institutions didn’t help much. I seem to recall that a whole raft of “safe” financial institutions failed in the mid 90s. And those were just the Jamaican institutions. In the last two years or so huge international institutions like Lehman Brothers and Bear Stearns also went belly-up. I won’t even bother to get into the “risk-free” government bonds that I’ve now been politely “asked” to exchange for bonds with a lower interest rate and longer tenor. As far as I was concerned, nobody was safe. So why not make 10% per month while waiting for the crash?

So there you have it. Call me a fool if you want but I’m still not sorry. I never got the Honda (much less the Range Rover) and I’m back to working two jobs and selling Visalus on the side. My wife is back to her usual miserable self and Tamara is planning to go to secretarial college when she graduates from secondary school. But, guess what? For a brief, happy moment I knew what it felt like to not have to worry about money. And that, my friend, is priceless.

We have 17 guests and no members online