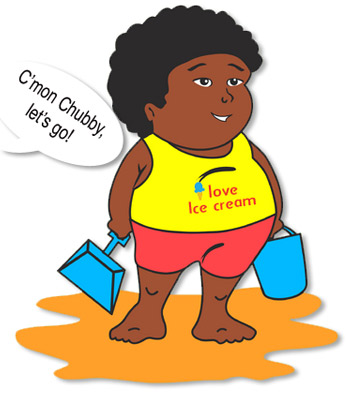 A Jamaican man walks through the shopping plaza with his wife and children on a busy Saturday afternoon. Out of nowhere comes a loud, piercing voice that seems to reverberate off the walls near him: "Yow Lippy! LIPPY!!! Backside, a you dat Lippy?”

The man pretends that he is not the one being called - not with THAT nickname and certainly not twenty years out of high school… And definitely not in public, with the family in tow. Finally, turning around, he looks carefully at the person calling to him. He vaguely remembers the face but the voice that continues to speak is unmistakable: “Lippy… how tings man? Bwoy, all ah now you nuh grow into dat lip yet, eh?”

And the humiliation continues.

Similar scenarios take place every day around the globe where Jamaicans are haunted by the Ghost of Nicknames Past. If that encounter happens to be in “farin” then that shout of recognition is even louder and more animated, since there is nothing like being abroad and ‘bucking-up’ a childhood friend/schoolmate that you used to hang out with back in the day - even one whose real name you have totally forgotten. In which case, of course, the nickname must be substituted.

What would we do without nicknames? Very often, they are unerringly accurate in describing our attributes - embarrassingly so at times. Growing up, our real names were used only by parents (especially when discipline was administered), by our relatives and definitely by our teachers. Close friends and arch-foes, however, always used nicknames. If you were called solely by your first or last name by your friends (e.g. “Wap'm Smith?”) then consider yourself fortunate or just plain boring. Also, if you had a nickname but despised it, you dared not let anybody know. You just answered to it. If they got wind of how you really felt, then that nickname would be repeated at every available opportunity, be mentioned in your memoriam notice and be etched on your gravestone.

But how did some of these nicknames come about in the first place? Well, I have seen nicknames result from random, back and forth, name-calling episodes between two persons until one of the names stuck – usually to the person who started the fight. But usually it was based on some physical feature of the person. So, if you happened to be tall and skinny then your nickname could easily be “Slim”, “Lenky” or even “Mawga Man”. At the opposite end of the scale there would be “Bigga”, “Piggy”, “Chubby”, “Flabba”, “We-are-the-world” (this one’s true!) or simply “Fatta”. In fact every community had about a half dozen “Biggas” and “Fattas”. So then, at times you had break it down even further: “Oh, you mean that “Bigga”. From round soh?”

Other nicknames commonly found in Jamaica include, “Blacka”, “Brownman”, “Shortie” (or “Shortman”) “Bunny”, “Oney” and “Horsemouth”. The nickname, “Oney” usually stems from some disability or condition – e.g., the person may have lost a limb or have just one (missing?) tooth. Similarly, anybody deemed ill-mannered, uncivilized, or never ever seen with a girl, could be labeled a “Tarzan”, and could be greeted in a manner similar to the following: “So, where yuh swinging in from now, Tarzan?”

Nicknames of persons I knew (and still know, in some cases) over the years include, “Sugar Teif”, “Bu**y Head”, “Ticks”, “Gully Rat”, “El Pollo” and “Germs” - all of whom are now, no doubt, respectable members of the Jamaican Diaspora (I would start a new life too, if I had any of those nicknames! Just kidding guys…)

Nicknames could even put a negative twist on what were normally admirable attributes. So the class “brains” in high school, for instance, might have been called “Sir Big Head”. A name given for his considerable mental aptitude, but more often said in derision, since he repeatedly threw off the midterm test result curve (“What di @#&%$... Another 100%, Sir Big Head?!!!”). So, imagine the irony years later, when you are hit by a car while carelessly crossing the road and ogling a woman. As you are wheeled into the operating theater at the hospital you happen to look up at the surgeon on duty that evening, and with surprise and a faint smile, you quietly whisper to him, “Sir Big Head, a you dat? Thank God!”