Things Jamaicans Fear the Most 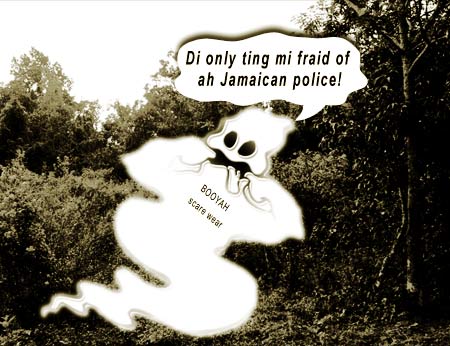 In the early 1970s Ernie Smith recorded a now legendary song called “Duppy or a gunman”. In that song he describes a romantic, late-night encounter between two young lovers which is brought to an abrupt end when something/someone sneaks up behind them and says in menacing tones: “Don’t move!”  The response of the terrified young Casanova, who assumes the voice is that of a ghost or thief, is to instantly forget his sweetheart and immediately take flight. Apart from just being funny, however, the song tells us a little bit about the things that strike terror into the hearts of ordinary Jamaicans. But what else terrifies Jamaicans? This article takes a closer look at a few of the things that frighten a nation of people who take pride in the fact that they don’t scare easily.

Duppy: Surely at the beginning of the 21st century your average Jamaican has no particular fear of duppies? (i.e. ghosts and other supernatural beings) Surely persons accustomed to really terrifying things (like rampant crime, category 5 hurricanes and the IMF) must scoff at duppies? Not quite. Even in 2009 many Jamaicans have a lingering fear of the supernatural. This belief can perhaps be traced back to an African notion that a man has two spirits, or souls. When that man dies, one soul goes to his reward in heaven while the other remains behind temporarily – or for eternity. Apart from spirits roaming the earth there are other well known supernatural beings such as Rolling Calf, Three Foot Horse and Ol Hige.

There’s plenty of evidence that ordinary Jamaicans still fear duppies. Have you ever seen someone turn around three times before entering a house? This is supposed to be a technique for getting rid of any ghosts that may have followed the person home.  And have you seen people who have just bought a house sprinkle white rum at the four corners of the yard? This is a way of appeasing spirits who may be otherwise inclined to give trouble. (Naturally any rum left over after appeasing the spirits is put to good use “appeasing” thirsty guests at the house-warming). I’m also told that dropping trinkets (jewellery and the like) on the ground behind you is another technique for getting rid of ghosts. Apparently some ghosts are incurably curious and will feel compelled to stop and pick up the trinkets left behind. (We’d suggest that you use cheap trinkets for this purpose. Your husband/wife will not appreciate your throwing away good jewellery, even to get rid of a ghost.)*

Gunman: The term “Gunman” is such a common part of Jamaican parlance that it seems almost silly to define it.  But for those who don’t know, a “gunman” is any armed criminal; whether thief, murderer or rapist. That the term is so common itself tells a story. Sadly, I’d be willing to bet that any Jamaican reading this has had a friend or family member who has been robbed (at work or at home) or who has been murdered by gunmen. Given the option between Rolling Calf and Gunman, I’ll take Rolling Calf.  At least Rolling Calf doesn’t carry an uzi.

Police: I would hazard a guess that Jamaicans are probably just as fearful of the Police as they are of gunmen. Both policemen and gunmen carry firearms, but the policeman has the legal authority to carry same.  He also has the authority to search your house, your car and your person.  He can pull you over on a lonely road at 3am in the morning, search you and your girlfriend, call you “bwoy” to your face, and then “reluctantly” accept a monetary “contribution” to let you go without a ticket for having one missing brakelight. Given the option between Jamaican Gunmen and Jamaican Police, I’ll migrate to Canada.

Shame: How can a people who are world-renowned for their confidence, even cockiness, be said to be terrified of being embarrassed?  Well, let’s look at the facts.  The majority of Jamaicans will never make a speech in front of a large audience in their lives.  Why?  Fear of making a mistake, forgetting a word and being laughed at.  Having trouble silencing a class of noisy Jamaican school children? Just ask for a volunteer to come up and read a poem/short story/essay. The room will instantly fall silent. Why? Fear of being laughed at by classmates (and the teacher).  Let’s take another kind of example - It’s actually rumoured that Jamaican appliance/furniture stores that offer hire-purchase terms have rates of default so low they would make the best-run commercial banks green with envy.  Why?  Because your average Jamaican would rather cut their own throats than face the embarrassment of having the moving van pull up at their gate, in full view of their bad-mind, chatty-chatty neighbours to repossess the new flat-screen TV!

Obeah: Obeah or “Science” is the common Jamaican term for “Black Magic”. For a fee, your local Obeah man can solve most of your problems or, if he has been employed by your enemies, he can also wreak havoc in your life. He can help your child pass GSAT and get into a good school. Or, if your child doesn’t pass GSAT, he can also make sure your neighbour’s child doesn’t pass either. (After all, yuh can’t allow them to have anything over you.) He can make a particular person fall in love with you or, if needs be, make someone who’s been stalking you fall out of love with you. He can make a witness to a murder disappear the night before the trial (ok, I admit this usually has less to do with obeah and more with gunmen) or, if the witness shows up, he can make a hostile jury find you innocent. A good obeahman can even make your rival develop a groin injury just a few weeks before the World Championships.  (I’m not saying that’s what happened Tyson.  I’m just letting you know who not to mess with.)  These examples will give you an idea of the terrifying power of a good obeahman.  Our advice is to make sure that, like a good lawyer and a good doctor, you always have one on call.

Hurricanes: One word explains the fear the average Jamaican has of hurricanes: Gilbert.  In September 1988 Hurricane Gilbert tore through Jamaica like a rampaging bull and left a path of savage destruction its wake. Scores died, hundreds were left homeless and almost everyone was left without water or electricity for weeks and even months on end. But even then I’m not sure it fully accounts for the enduring fear of hurricanes in Jamaicans that almost borders on the irrational. Some twenty years after Gilbert all some people have to hear is the vaguest mention of a “system” or “depression” forming somewhere off the coast of West Africa and thousands of panicked homeowners will descend on supermarkets and hardware stores like locusts, stripping the shelves of corned beef, candles and bottled water.  Having cleared the shelves of all the “staples”, desperate shoppers will even start buying things they wouldn’t ordinarily eat:  “Since we cyaan get no bully beef, the tinned olives will just have to do”.  Having secured a full three months worth of food terrified Jamaicans will next turn to the hardware store where they will buy enough nails, plywood and masking tape to re-build Noah’s ark. Others will buy generators large enough to light up the National Stadium... even though they live in a two bedroom apartment.  Having locked, nailed, taped, tied and battened down everything in sight they hunker down like people awaiting the second coming of Christ… or at least World War 3.  They sit glued to their transistor radios and listen to every scrap of news even remotely related to the coming storm. New information is instantly relayed in hushed tones from one “hurricane expert” to another. “Yes Mavis, Hurricane Glenroy is now officially a category 4 and picking up speed.  My assessment is that the warm water from the Atlantic and the cool air from El Nino are combining to increase its intensity. I’m predicting landfall in three hours or less!” Three hours later the “hurricane” arrives.  Sure enough, it’s been downgraded to a “depression” and the result is a light drizzle and a gentle breeze.

We have 14 guests and no members online