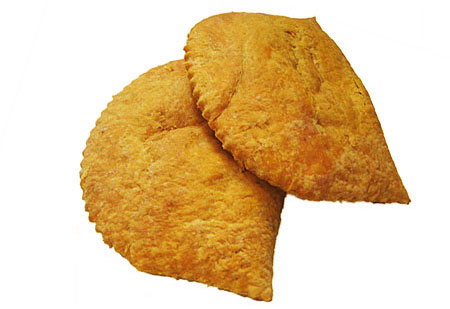 Recent tests by chemists (apparently with lots of free time) on US currency in circulation, made the stunning revelation that over 95% of the money had traces of hard drugs affixed to it. As amazing as this fact is, it would not compare to what a similar analysis would reveal about Jamaican money – which is that every single dollar contains significant amounts of microscopic patty crumbs and the powdery flour residue from coco-bread (that same examination would also, I suppose, reveal similar quantities of that sugary substance from the Jamaican favourite, the bag juice, but that’s another article).

Similarly, if biochemists were just prodded in the direction of a serious analysis of the Jamaican genome, it would reveal a patty-loving gene fused into our DNA at the point of conception. When fully manifested in the adult Jamaican, this love of patties as the “go-to” lunch-time snack is one that crosses all socio-economic classes (as opposed to say, ”jackass-corn” and ”suck-suck”) and one that sometimes causes weird unconscious behaviour. Thus, there are times when you may find yourself in the parking lot of a Sugar n’ Spice or at the Juicy Beef drive-thru and not even remember how or why you’re there. There you are, sitting in the car, thinking to yourself, “A minute ago I was rushing to the bank…why am I now here?” And then your brain restarts, “But yuh know, ah long time mi nuh eat a patty!”

After purchasing that patty, you may be determined to eat it immediately before proceeding on your merry way. As a result, you will have to contend with the two different types of heat found in a patty. The first is the high temperature of the patty itself. At the same time, you must also deal with the large amounts of pepper that seasons the meat. You may think you have all things covered when you begin, so you start with small nibbles, slowly working your way down to the “meat of the matter”. Now, this is where it gets tricky. You are at one side of the patty eating away, being cautious, when at the other side (out of sight at a mere 4 inches away) a huge piece of blazing-hot meat is slowly oozing up and out. We’ll stop at this point and now compound all of this by adding another element to the scenario – You’re now eating the patty, while driving!

If you choose to eat while driving, just be advised that this is a very, very, dangerous practice. We are told in no uncertain terms not to drive under the influence of alcohol or drugs. Well, surely you’ve heard about the large number of accidents and near-misses that are caused annually by eating hot patties while driving? Never heard of any such thing? Ok, that maybe just my own bad driving habits!

So, if while driving (and this is from my own experience), a piece of meat pops out and falls into your lap or somewhere nearby, just wait! The stop-light is the opportune time to find that errant piece of patty meat. If it’s large enough and drops on your shirt, well that would just be a disaster since Procter and Gamble has not yet formulated a detergent powerful enough to remove a really good patty stain.

Even more dangerous for a novice: accepting a cell call, while eating a patty, while driving. The responsible driver/patty eater would dismiss that call with a quick, mouth filled: “A caawn tawk now…CLICK!”. This advice, if not followed could end up like a badly scripted Hollywood movie (albeit, one filmed in Jamaica on a cheap camcorder on an extremely small budget):

Early on the scene of the unfortunate accident, the officers speak in solemn tones, discussing the carnage that lies before them:

Officer Brown: “I concur, Officer Smith…all the signs are there…The long skid marks…Patty meat splashed all across the broken windscreen and look at those crumbs on the dashboard. Wow, his fingers are still clutching that coco bread! Even as his life flashed before him, he thought he could have saved his lunch – such determination!  And what about that Blackberry stuck to his face…should I remove it?”

Officer Smith: “No, leave it Officer Brown… Damn…It’s another DUIHP (Driving under the influence of Hot Patty)!”

We grew up making jokes about the content of patties, even while we bought and ate them everyday in the high school cafeteria or at the patty shop.  Back then if someone made a comment along the lines of: “You have to take their word that there’s actually cow in that beef patty”  I would reply: “I don’t care if it’s my dog Fluffy in there… And if it is you, Fluff…you were loyal to the end!”

Jokes aside, there has never been a debate, to my knowledge, as to nutritional value of the patty. Anyone raising such a question would receive the same perplexed look as someone at a road-side crab stall by Heroes Circle asking if “di crabs dem clean?” I mean, does it even really matter? Still, I’ve often heard that if you ever saw what goes into beef patties you would probably not want to eat one. I guess that’s the reason I never go snooping around the back of the patty shop when I go there - which is every chance I get! Mind you, I’m into eating healthy, but patties are the exception.

It was recently revealed that one key ingredient contained in the crust of some patty brands is actually the kidney fat of cows. Well, I’m certainly sorry to have ruined your day if you did not know that. But I tell you, that bit of information didn’t make me change my patty eating habits one bit and it certainly shouldn’t change yours.

Interestingly enough, with this fact now out in the open, a recent caller to a radio talk show lamented the fact that the makeup of the patty crust was withheld from him. Being a vegetarian he was extremely perturbed when he realized his vegetable patties were “contaminated”. But why even eat a vegetable patty anyways, I say. I mean, where is the joy in eating a patty if steaming hot mystery meat isn’t causing unbearable grief to the soft inner lining of your mouth or filling up your body with unhealthy cholesterol and saturated fats? If you want vegetables, go order a Caesar salad at Wendy’s!

By the way, while I’m out to offend, must I ask why is it taking so long for the pork patty to make its debut? Some of Rastafarian faith (and others too) may say “fire bun fi pork patty”, and I would wholeheartedly agree.  As long as that fire is in an oven, at a constant 400°F, and the patties are removed 20 minutes later and served to me with a soft, moist coco bread!

We have 13 guests and no members online