Things that will piss Jamaicans off 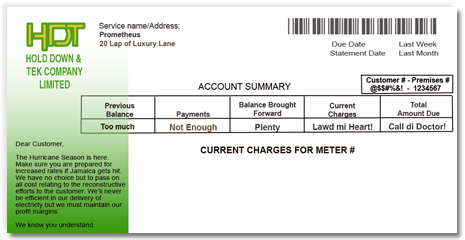 Jamaicans have a well-deserved reputation for being among the most volatile people in the world. Our contention, however, is that it’s really only very specific things that will trigger the fury of ordinary Jamaicans.  If you avoid these “triggers” Jamaicans are some of the most loving and docile people on earth. (That one made me laugh too, when I wrote it). Anyway, here a few things that are guaranteed, as they say on the street, to “bring out the darkness” in Jamaicans:

Bad driving: Maybe you can live with the fact that you’re already late for work. And just maybe you can live with the bumper-to-bumper traffic that you’ve been sitting in for the last hour. And if you really breathe deeply and think peaceful thoughts like the therapist taught you, you can almost put up with the crater-sized potholes in the road that force you to drive through them at two miles per hour. But when that taxi driver races out of a side road at 90 miles per hour and wedges himself into the traffic in front of you as you slam on your brakes, it’s enough to bring out the demon in you. It’s enough to make you want to stop your car in the middle of the road, haul the taxi man from the vehicle by his shirt collar and beat him to death with a lug tool in the middle of Hope Road.

Disrespecting Mama: Any sentence directed at a Jamaican man that ends with “yuh mumma” will start a fight. In absolutely no way, shape or form, is Mama to be disrespected within earshot of her “big son”.  And it’s really of no moment that you and Mama never really got along, that she always preferred your brother Leroy to you, and that you haven’t visited her in three months. It’s the principle of the thing.

Highway tolls: The concept of a toll road is one that Jamaicans have great difficulty with. It’s been a few years since they were introduced to the island but they still elicit a variety of very negative responses. Those responses tend to be along the following lines: “So, let me see if I understand you. You want me to pay to drive on the public road? Mi mus’ pay fi breathe oxygen too?” Other responses are along the lines of: “So mi mus’ pay dem before mi can go ah work in di morning, an den mi mus’ pay dem again before mi can go home ah night? Mi nuh might as well tan ah mi @#$!&* yard?!”

Increases in utility bills: I don’t think people understand the fury that increases in the prices of utilities will bring out in the average Jamaican.  Perhaps it’s the sense that the increases are from some cruel and capricious entity (i.e. the utility provider) that we, as mere mortals, have no power over? Whatever the reason, I suspect that the utility providers would be astounded to know the full impact of these increases on the average household. First of all, there’s, the spontaneous eruption of anger that occurs as the man of the house, already tired from a long day, steps through door and reads the increased bill. Then there are the harsh words he directs at his wife as he takes out his anger on her. Those harsh words are followed by a silent and bad-tasting dinner (the wife, in her annoyance at being unfairly barked at by her husband forgets to turn down the fire under the fried plantain). The husband, still angry about the bill and his wife’s silence, leaves the house after dinner for a few drinks at the nearest rum bar.  A few drinks turns into several. Two or three hours later he’s at the go-go club where he meets a 15 year old dancer with whom he later fathers a child.  The end result is that the husband goes to jail, his wife divorces him, his daughter has to leave school and herself becomes pregnant for a middle aged man.  Alocholism, adultery, teenage pregnancy and failed marriages… all as a result of an increased light bill.  Utility providers, is it really worth it?

Gas price increases: The last time the Government put a tax on gas they started hinting at their intentions months in advance. This was a prudent move. As media commentators picked up on the story it was so extensively debated that, before long, the issue no longer stirred any emotion in anyone.  Perhaps this was exactly the plan? As the previous Government found out to its dismay, you do NOT want to spring a gas price increase on Jamaicans. Blocked roads and burning tyres are sure to be the result.

Matey Business: Now let’s be honest here. The average Jamaican woman may not be completely stunned to find out that her husband/boyfriend has a female “friend” on the side. (A “matey” as they are known in common parlance). The existence of this friend may be a source of annoyance to the “wife” but for many women this is something that they are prepared to live with once the husband/boyfriend treats them with civility and attends to their material needs. What will turn that annoyance into anger, however, is where the husband/boyfriend starts treating the matey better than the wife.

So, if matey gets a few dollars “ah week time” that’s fine. But if matey has access to a joint US$ bank account with her name on it, then this is going be a problem. If the husband/boyfriend sneaks out once in a while to discreetly handle his business, that’s one thing. However, if he starts inviting matey to the Christmas dinner, then this will be a major problem. But these are all the decisions/actions of the boyfriend/husband. What will turn a loving wife into a murderous virago, however, is where matey herself disrespects the home. So if matey knows what’s good for her she dare not speak ill of the “wife” in public. Worse yet, if matey dare pick up the phone to call the matrimonial home or, horror of horrors, appear at the matrimonial home to speak directly to the wife, well call the police now... this is about to become a crime scene.

We have 4 guests and no members online