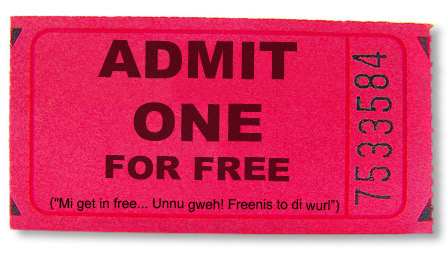 There is a universally accepted adage which states that there is more happiness in giving than there is in receiving. Though this may be true, it certainly seems that in Jamaica nothing compares to the immense joy of receiving something of value absolutely free of cost – a phenomenon commonly referred to as ‘freenis’.

Jamaicans love freenis and we have mastered the art of putting ourselves in the position to be the beneficiaries of free stuff. Thus, we will immediately jump at an offer of a free ticket to a movie, concert or even a high school barbeque. Similarly, glimpsing free t-shirts or mugs being given away at a party will make some of us slice through a crowd, straight to the source with ninja-like dexterity. And some would even consider a free igloo set the deal maker when deciding to buy living room furniture!

While the majority of us expect some freenis every now and again, there are some among us who take it a step further with the expectation that they must, without any effort on their part, always get something for nothing, thus developing what’s known as a Freenis Mentality.

Persons stricken with this condition are generally considered a nuisance to society and are often identified by their frequent use of the following expressions when communicating with family, friends and others unfortunate enough to cross their paths (the translation in italics indicates the actual meaning of their barefaced utterances):

“Yuh want dat?”
(Even though you probably spent money on it, surely you don’t want it…can I have it instead?)

“Yuh have an extra one?”
(I know you didn’t offer me any, but I just figured you have another one somewhere…can I have that one?)

“Is really sell you going to sell it?”
(Why make monetary gain for it when you can give it to me for free…I would like to have it!)

…and finally, the tried, tested and true:

No doubt, none of those expressions has ever escaped our mouths…Right? Closely examine the following scenarios though, see if any of them relate to you, and then make a realistic assessment of how highly placed on the freenis meter you really are.

Now, if you answered in the affirmative to even 1 of these 6 scenarios, you are definitely a freenis-loving Jamaican.

But then, I already knew that!