A Barrel from Farin (Foreign) 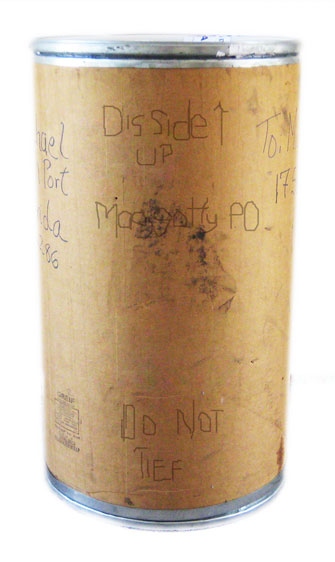 Just for a second, imagine Santa’s big red bag of gifts in the form of a fibre drum. This I dare say is the true representation of a shipping barrel to many Jamaicans – it’s Christmas in a corrugated cardboard container! Indeed, the arrival of a barrel is often a joyous occasion no matter what time of year it comes, since it means that the cupboards will now be stocked and your old belongings upgraded.

The practice of packing and sending a barrel is a Jamaican tradition. It's a tradition that sometimes doesn’t end even when the intended recipient(s) in Jamaica feel that they are now well-off or that they could make better use of the money their relatives are spending to pack and ship that barrel. So, don’t even bother telling that uncle of yours not to send anymore barrels of tissue, rice, tin mackerel and that whole cow worth of bully beef, just because those items are sold in Jamaica.  That would be plain ingratitude.

Nowadays, as in the past, barrels are usually shipped at Christmas time or at the end of summer to coincide with the start of school season. Back in high school, whenever I heard the expression “Baaaaaarrel Coooome…”, bellowed throughout the form block, it meant that a schoolmate was either wearing or carrying something new to school.  So whether it was a new Reebok or Nike ‘crep’ for PE class, a new Jansport schoolbag or a treasured Trapper Keeper folder, they were mercilessly teased that the barrel had just arrived.  Of course the new stuff came in a barrel, the other classmates surmised - where else would it come from? It was the easy explanation.

The process of sending a barrel has remained unchanged over the years. There are certain requirements that both the sender and the recipient need to adhere to for the barrel to reach its destination safely and be cleared promptly.  Primary among these, on the part of the sender, is that the recipient’s name and address be written with a big black permanent marker so boldly and clearly on the barrel, that it could be seen from around a corner!  Thus, Pernel Smith from Maggotty, having left home from before daybreak to reach the wharf in Kingston should not wait an additional hour as the guy trying to locate her barrel deciphers information written by Pernel’s family abroad with a small yellow highlighter.

Having now located the barrel, the contents are assessed to determine the value. This is the job of the customs officer.  You may find that you’re assigned one of the overly detailed female customs officers that don’t miss a thing.  Just be prepared to know the value of that small box of expensive looking paper clips!

You should also be aware that after opening and unpacking a barrel at the behest of the customs officer, the contents will never go back in without the aid of at least one or two other helpful individuals versed in the skill of repacking.  Thus you would be hearing expressions of assistance like:
“Yeah… di flour can goh back right deh soh” or, “shoob dung the shoes...dem nah ben’ up jus’ soh”. You wonder aloud how they were ever packed in to begin with. Indeed, its a testimony to the skillfulness of that relative who lovingly crammed it all in.

Transporting the barrel from the wharf should ideally be the job of a pick-up or van, a small truck or some kind of station wagon or SUV – don’t drive your Suzuki Swift – the barrel will not fit! It amazes me that this important fact is often overlooked.

So now you are home and the barrel has been emptied.  The younger kids are already in those shoes, two sizes too big and you have just come off the phone explaining to your aunty that the jeans she sent, are definitely not your size…what now? You would think that it’s now time to roll the barrel away to the dumpster. Wait…not so fast. For many, the real usefulness of the barrel has just begun.

The expression empty barrels make the most noise is an apt one here in Jamaica, since you can possibly find, on the top of a barrel in a home somewhere, a television or compact stereo unit, permanently positioned, blasting away the latest news or hit songs. Yes, the said barrel has now become furniture. Not limited to that, the use of barrels have ranged from pantries to storage containers for clothes and linen and a myriad of other things. In Jamaica we really know how to use it up ‘til it dun’.

So remember, the next time you’re in traffic and you notice a van beside you with a barrel in the back, enroute to its destination, know that it’s not just a barrel – it’s a tradition.

We have 5 guests and no members online