Inventing new ways to shake hands/greet each other 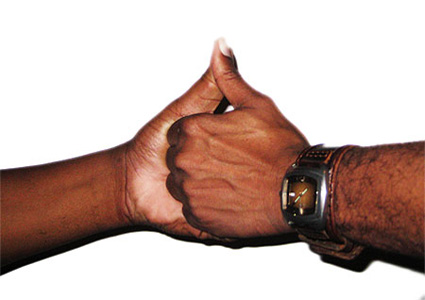 In the beginning… there was the humble handshake. Polite, versatile and almost universal. Then, in the 1970’s there came the “gimme five”, where “cool” people greeted each other by slapping palms together, one on top of the other. This was soon followed by the “high-five” where persons slapped palms together high in the air. In the 80’s, came the enormously popular “boom fist” where folks knocked closed fists together, one on top of the other, or fist forward with the front of each fist facing the other. In the 90’s coming into the new millennium, however, we got a little carried away…

Nowadays, it seems as if every week there is a new, ultra cool, way to “shake hands”. At one point, there was the “Lion paw” which appeared to be very popular with rastas (and rasta-wannabes). At the moment, there’s the extremely fashionable “hand-shake-followed-by-thumb-rub” where persons clasp hands and then, before releasing, rub their thumbs together two or three times in rapid succession. (There are a thousand versions to this one). In fact, for the really trendy, its no longer even necessary to clasp hands, the “thumb-rub” alone will do. There’s also the “hand-shake-followed-by-finger-snap-as-you-release” which, frankly, I think only musicians and 16 year old boys really know how to do. (This one may have originated in the U.S. but, like Obama, we’ve adopted it as our own).

Such a greeting is usually accompanied by “Yow star/don/rude-bwoy/king/pardy/fada/top-man/top-ah-top/doops/blessed or whatever happens to be the popular mode of address at the moment.

The trouble, of course, with all of this, is that being current with the latest “greeting” is an amazingly accurate measure of how cool and in-the-know you are. Learn the greeting and be cool. Shake hands like your grandpa and be an outcast. Its that simple.