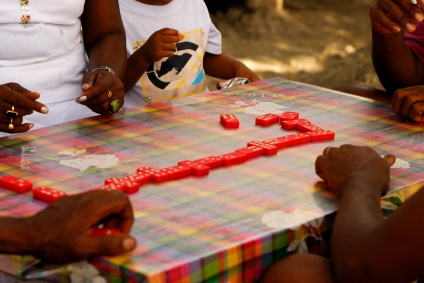 I never quite understood the almost maniacal extent to which dominoes is played at every available moment in Jamaica. On any given night, in any given town, you can find, usually in front of a bar or corner shop, a group of men and sometimes women, silently seated around a sturdy looking table, with steely concentration etched on their faces, intermittently striking the top of said table with the excuse that they are playing this game.

For years I have asserted my belief that dominoes is a violent game, ever since that night, many years ago, when two of my closest friends started fighting because one was teased over being given 'love' (by a male domino player) after losing a match 6-0.  Thus, I would get worried when, on a promising evening back then, someone in the group would all of a sudden ask, “Yuh want wi play dominoes?”.  I knew any game that had a variation called ‘Cutthroat’, could have unpredicatable results!

As it turned out, no more fights ever broke out.  But, as always, I knew that dominoes meant a boring night, soundtracked by singing crickets, occasionally punctuated by the words, “How much yuh ‘ave?” and ultimately reaching a crescendo with a rapid succession of noisily placed dominoes -  a process which would be repeated for several hours.

Now, mind you, I tried understanding what all the hype is about. I partook in my fair share of games and invariably they ended with me in a state of confusion as to why the individual to my left or right, having already kicked away his/her chair was now standing over me, laughing, while at the same time slamming down 3 or 4 dominoes in a row - I just never got it!