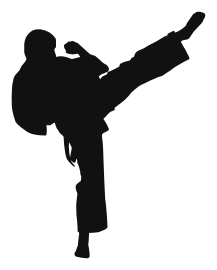 It’s a documented fact that a love of martial arts movies runs through black people’s veins. This stop-you-in-your-tracks type of visceral emotion is evidenced whenever a Jamaican, usually male, tries to walk past a television playing one of these movies.  Certainly, because of this level of subconscious conditioning, many a Jamaican has bought into the stereotype which suggests never picking a fight with a person of Chinese extraction, or they just may just end up having a taste of the pavement.

This love of a good ‘Kickers’ is especially found in those persons who were introduced to martial arts films during the height of Bruce Lee’s popularity in the seventies. I was still begging permission to go outside of the house back then, but on one of the few occasions when I was allowed out, I remember being huddled in front of a tv screen along with a group of friends watching Bruce Lee’s ‘Enter the Dragon’. We all walked into the house that Saturday afternoon to watch the movie and we exited with flying kicks, everyone a martial arts specialist.

Years later, as an adult, I remember watching a documentary on the history of martial arts cinema.  I rarely ever make note of a program's air time, but this was an exception.  So much so, that a note was stuck to my computer screen – a spot that I could not miss. That evening, with notepad and pencil in hand, I watched with keen interest while making note of the classics: Jackie Chan's Drunken Master – check; Return of the Dragon– check; The 36 Chambers of Shaolin – check...until the page was full.  I would buy them, rent them (and maybe not return them), search for them on the internet. At least now I knew their names – and my life had meaning!

We have 3 guests and no members online