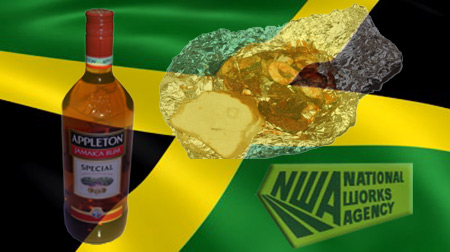 Around this time each year the recipients of National Honours and Awards are awarded their honours in a swanky ceremony on the lawns of Kings House attended by numerous dignitaries and closely watched by the news media. Persons who have served the country with distinction in a wide variety of fields are given Orders of Distinction, Orders of Jamaica, rders of the Nation Medals of Honour and so on. While these persons are eminently deserving of these honours we believe that there are also a number of outstanding Jamaicans who have been left off the list of honourees who should be recognised for their contributions to the Nation.  ThingsJamaicansLove.com would therefore like to respectfully recommend that the following persons and entities be awarded national honours without delay:

The Ministry of Transport, Works & Housing and the National Works Agency – the failure of these bodies to adequately maintain Jamaica’s roads has led to the prevalence of potholes and other road hazards which have forced Jamaican motorists to develop razor-sharp reflexes, superior hand-eye coordination and the ability to think quickly when faced with danger. We believe that in due course these wonderful skills will lead to a number of Jamaicans becoming world class fighter pilots or at the very least winning the Formula 1 Championship. An Order of Distinction is well deserved.

J. Wray and his Nephew – When we think of the countless friendships fostered, the numerous “bundles of joy” conceived and the inumerable nights of fun and revelry enjoyed by millions of Jamaicans since 1825 while under the influence of Mr. Wray’s potions we believe that Mr. Wray and his nephew deserve posthumous awards of National Hero status. (Side note: we might point out that Mrs. Joy Spence, the Master Blender at Applteon has been very deservedly awarded an Order of Distinction for service to Industry).

The man who invented the beef patty - The origins of the patty are obscure, some say it comes from the Cornish Pasty, a meat filled pastry eaten in England and others say it was a pastry imported from Haiti . Whatever its origins, the original Jamaican fast food has enabled countless Jamaicans to stave off hunger at an economical price for decades. We recommend an Order of Jamaica.

The man who invented the cocoa bread - Why? Because a patty by itself is just a snack. A patty and a cocoa bread is a meal. We recommend an Order of Distinction.

Minister of Justice Mark Golding – For finally freeing up the weed, even if its only a little bit. God bless his soul. We recommend an Order of Distinction.

Dutty Berry, Ity & Fancy Cat, politicians from both political parties – We recommend awards for everyone who’s humour, antics and general buffoonery (intentional or otherwise) have helped to distract us from the hardships of Jamaican life. We think Orders of Distinction would be appropriate.

The man who invented Hardough Bread – eating a slice of moist, chewy, steaming-hot-from-the-oven hardough bread with or without butter/cheese from Jack’s Bakery on Red Hills Road is an almost religious experience. Try it if you cant relate. We recommend an Order of Jamaica.

My barber Mark -  A good haircut for a reasonable price is a thing we don’t celebrate often enough. I recommend an Order of Distinction.

Dr. Carl Williams, Commisioner of Police - For taking on an incredibly difficult job which will be subject to constant scrutiny, possible political interference and severe criticism. That is a brave brave man. His valour deserves a Medal of Honour for Gallantry.

The Chinese – For restarting the stalled Highway 2000. The recently completed Mount Rosser Bypass saves on time, stress, gas money and lives. An Order of Jamaica is well-deserved.

The Sound system operators of Jamaica - From Coxsone Dodd right back to Tony Matterhorn and Wee Pow we recommend that Jamaica’s sound system operators be honoured for consistently playing sweet Jamaican music from the 1940s to today, for bussing new artistes, for bussing new riddims, for helping to provide employment for vendors, dancers and entertainers, for taking Jamaican music to the four corners of the earth, for giving Jamaican youths something positive to do on long hot summer nights and for disturbing bad mind people for decades. We recommend Orders of the Nation.

We have 16 guests and no members online