Why did the Chicken Cross the Road? A Jamaican Response* 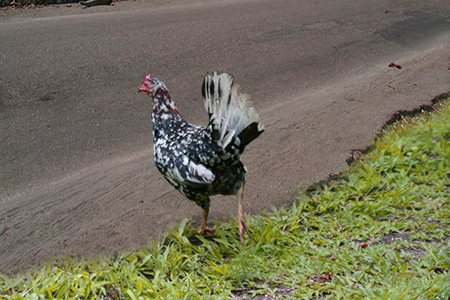 Everybody knows the old joke “Why did the chicken cross the road?  To get to the other side”.  Everybody also knows that if you ask a Jamaican a stupid question you’re bound to get an interesting answer. Being curious folks, TJL.com traveled the length and breadth of Jamaica to ask a wide variety of persons their views on why the fowl crossed the road.  Here are their answers:

Former Senior Superintendent Radcliffe Lewis:  "Well the chicken attempted to cross the road but because the road was slippery like okra he ended up in a four vehicle collision."

Resident of Portmore:  “Because that was the only way to avoid paying the toll.”

Audley Shaw: “Because, having spoken to his constituents and supporters, they advised him that he was the best chicken to lead the party across the road”

Andrew Holness: “Because he’s a younger, smarter chicken who doesn’t believe in ray-ray.”

Chris Gayle:  “Because the West Indies Cricket Board told him not to cross the road.”

Vybz Kartel: “He had no choice.  He was in handcuffs and the jail house was on the other side”

Bob Marley: “Well, as I an I see it, the chicken was in Babylon and Zion was on the other side of the road.  Yuhseet?”

Usain Bolt: “Because he wanted to break the record for road-crossing by chickens”

Asafa Powell:  “I didnt even notice that he had crossed; I lost my concentration and had started looking at the chicken in the lane next to me”

Asafa Powell:  “Well, the chicken is being investigated for using performance enhancing drugs so he cant cross anything right now”

Portia Simpson Miller: "I don't know why the chicken crossed the road, but I'm willing to fly over there and find out".

Portia Simpson Miller: “I have no idea, but he has a vote so bring him over here so I can hug him”.

P.J. Patterson: “My credentials as a poultry-lover are impeccable”

David Smith: “Because I told him, give me one chicken and I’ll give you back ten chickens per month, guaranteed”

Barack Obama: “Because the chicken was a Republican and the Democrats told him not to cross the road”

The Chicken: “Well I’m Jamaican and I was crossing the road on my way to Trinidad but when I got there the Trinis sent me back”

The Chicken:  “I had to cross. The Government gave the land I was standing on to the Chinese so they could build a transhipment hub.”

The Chicken:  “Because the road was clear. Everybody was at home watching Tessanne Chin on “The Voice”.

*We’re indebted to Din Duggan who wrote a similar article in the Daily Gleaner some time ago and gave us the idea to write this.