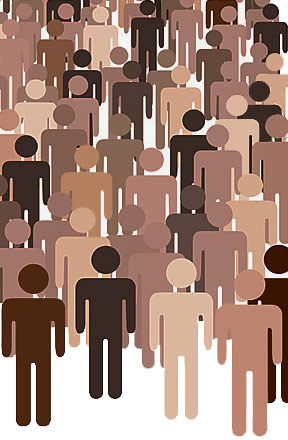 You’re not really Jamaican if you’ve never had an experience something along these lines: You’re a child attending a family gathering of some sort with your mother in the country.  During the event she calls you away from where you’re playing jacks/marbles/stucky with your cousins and says “Charlie, come meet yuh Aunt Silda!”

You reluctantly abandon your game and slouch over to where your mother is standing with an elderly lady who smells faintly of bay rum and ginger: “Charlie, this is your Aunt Silda.  You don’t know Aunt Silda-Mae Brown from Chalky Hill?”

Your polite (but disinterested) response is: “No mummy”

You wonder idly to yourself “And who the heck is Mas Joe?” but being a polite child you simply say: “Yes mummy”

You pretend to be interested while smiling politely and shaking the old lady’s hand, all the while wondering “Who is this person?  And why should I care?” Your mother, perhaps mistaking good manners for genuine interest, offers an answer:

Realizing that you are completely lost she attempts to “explain” further:

“Aunt Silda-Mae is the third daughter but the fifth child for Mas Joe. You don’t recall? Nevermind, just remember that Mas Joe is Mas Wilfred half Brother and as you know Mas Wilfred is your father’s second cousin on his mother’s side.”

Your response at the end of this detailed exposition on your complicated family tree is: “Huh???”

Sound familiar? As that small example demonstrates, complicated family trees are a common feature of Jamaican life. The reasons for this are numerous and varied. For one, Jamaican men tend to be a prolific lot, and if you don’t believe me, then the next time you have the opportunity, listen to the funeral announcements on local radio. A typical announcement will be along the lines of: “Ezroy Aloysius “Solomon” Johnson died leaving 13 children, 19 grandchildren and 34 great-grandchildren.  He is also survived by 7 brothers and 8 sisters. Funeral service will take place this Saturday at the Mount Fruitful Baptist Church. Interment will follow at the Abundant Life Cemetery. Donations will be taken for the Family Planning Ministry and the Lost Angels Children’s Home. Cheerful colours please.”

Announcements like these would seem to suggest that some Jamaican men take the biblical injunction to “go forth and multiply” as an unbreakable commandment rather than a polite suggestion.

But complicated family trees don’t just stem from the fact that Jamaican men have large numbers of children. It also stems from the fact that these numerous children are usually had with numerous women. In some cases the man may be married to one of those women but have a number of “baby mothers” on the side and, in other cases, he may not be married to any of these women but may have relationships with them one after another or simultaneously. Some children may take his last name and others may not. The result is large numbers of persons who are related to each other in some very complicated ways.

Although I find these relationships quite confusing I’m always amazed at how Jamaicans of a certain generation treat these byzantine connections as being par for the course. I can recall my mother and my aunt chatting on the verandah of our house on long Sunday afternoons when the name of some distant, almost-forgotten relation would come up and they’d then spend the next hour or so untangling their relationship with them. I’m convinced that the engineers at Google would be hard-pressed to come up with a computer model or algorithim of sufficient genius to fully map out the fiendishly complicated relationships that were stored in the heads of my mother and my aunt.

If you need another example of the complicated-ness of Jamaican familiy trees then answer the following questions: How many Jamaicans reading this have siblings (who are not your twin) who are the same age or roughly the same age as you are? How many of you “discovered” these siblings at the most awkward possible times? I bet a bunch of you are sitting at your laptops nodding in agreement.

A friend of mine vividly remembers her first day in high school when she realised, as the teacher was taking the register, that there was a girl in her class who had the same cool, cocoa-brown complexion that she did, the same curly black hair and, most incriminatingly, the same last name.  Unfortunately, the similarities were also not lost on her classmates who teased them mercilessy by asking “Which one ah yuh ah di outside pickney?” Her namesake was quietly transferred to another school at the end of the term.

It would seem to me that the only way a Jamaican can truly be certain that they have no siblings they haven’t yet met is to wait for the day of their father’s funeral.  If no hitherto unknown outside kids and previously unheard of babymothers show up on the day to share in the “dead-lef” then you should be fine.

Discovering a sibling by chance can be troubling and awkward, but by way of contrast we could also ask the question: how many Jamaicans reading this have grown up quite happily with their half-brothers and half-sisters in the same house and love them no less than any other sibling?

Another factor which adds complexity to these familial relationships is the (now less common) habit of parents in the country sending their kids to live with relatives in town because those relatives lived closer to a particular school or because they were better able to support those children financially.  These kids often grew up for all intents and puproses as the natural children of these foster parents and over time confusion could develop as who were “real” parents and who were not.

All the above leads me to a few inescapable conclusions. For starters, in Jamaica you had better be very careful who you date and who you marry because there’s a decent chance that they could be from the same gene pool as you. You should also try to “live good wid people” because the person you splash on the sidewalk or cut in front of in the supermarket line could be your flesh and blood and your mother definitely raised you to treat family better than that. In any case, I’m starting to wonder if maybe it isn't time to consider making a minor adjustment to the National Motto by changing it from “Out of many, one people” to “Out of many, one family”?

We have 5 guests and no members online