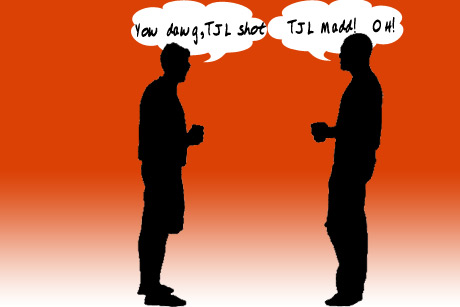 Who on earth can keep up with Jamaican slang terminology? As far as we’re concerned only 14 year olds and dancehall DJs have that special gift, but despite that, we’re still fascinated by the brilliantly inventive, lightening-quick, non-stop evolution of popular speech in Jamaica. Here are some of our favourite slang words/phrases of 2010:

An’ all dese tings – Seems to be the rough equivalent of “And so on/And so forth”. This year it seemed to TJL that everyone we spoke to (or at least the trendy folks) used the phrase “an’ all dese tings” like a full stop at the end of every sentence. E.g. “Trus mi dawg, 2010 was a miserable year. From drought, to flood, to Manatt, to JDX, to State of Emergency, an’ all dese tings”

OH! –We have the Dancehall Hero himself, the always quotable Vybz Kartel, to thank for TJL’s favourite slang of 2010. “OH!” was popular both in the streets and in the dancehall; so much so that it almost seemed to become a punctation mark, like a dancehall comma or full stop, in the sentences of hip young Jamaicans. Listen to Shawn Storm’s My Life for just one example of how it’s been used:

“Set good like di ice inna freezer” – If there was an Oscar for Best Line of the Year this line from Vybz Kartel’s Dumpa Truck would’ve copped it. TJL just wishes we had thought of it first.

Pree – To watch/study/observe someone or something. E.g. “From the other day me notice you a pree mi. Wapm, yuh like me or supm?”

Stulla – Wukka man, Stamina Daddy. And if you don’t know what a Wukka man or Stamina Daddy is, then it likely means that no-one has ever described you in that way. And you therefore have our sympathies fella. We’re kidding (sorta). A wukka man, stamina daddy or stulla is a man with outstanding sexual skill and stamina. Stulla was introduced to the world by dancehall DJ Mavado in a song called Long Distance Stulla.

Build – To chill or scope out the scene. Some of you will recognise the line from dancehall DJ Chan Dizzy’s Nuh Strange Face which goes:

We have 9 guests and no members online