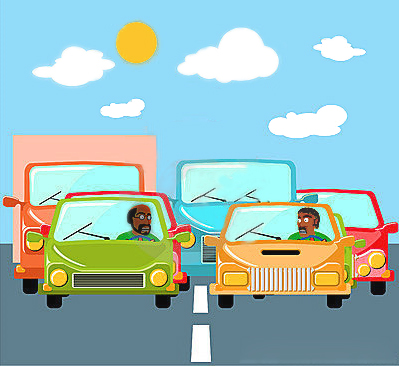 I’m addressing this post to all the drivers of buses, trucks and taxis in Jamaica. Now I’m not attempting to single you out for ridicule or persecution but you’re the persons who spend the most time on the road and are, from my observation, responsible for most of the madness that passes for driving these days. And no, I’m not going to simply dismiss you as homicidal morons as so many others have done before. Instead, I’m going to offer you some free advice because, in my heart of hearts, I know you can change for the better. So, please take careful note as I point out some of the more annoying things you do on the road:

1. Stopping suddenly in the middle of the road: If you need to stop to pick up or let off passengers please make sure to slow down first and use your indicator while doing so. It may have escaped your notice, but if you stop suddenly (as some of you are wont) the driver behind you will be forced to slam hard on his brakes to avoid damaging his vehicle and yours. If you persist in doing this, sooner or later you will cause damage to the vehicle of someone who will get out of that vehicle and kill you on the spot. I’ve been forced to kill in the past and I’m not afraid to do it again.

2. Driving off suddenly: Given that your stopping suddenly in the middle of the road has already caused great inconvenience and annoyance to other motorists, please exercise extra care when moving off again. Don’t simply speed off, tires squealing, without so much as a hand signal. Such dramatic escapes are more appropriate for bank robberies and prison breaks and are generally unnecessary in the ordinary course of things.

3. Blocking the intersection: This is an excellent illustration of the old adage “one fool makes many”. So Fool #1 is sitting in his car at a stoplight. The light turns green and the persons ahead of him drive through the intersection. The traffic, however, is moving very slowly and before Fool #1 can drive through the intersection the light begins to turn amber. But instead of waiting patiently where he is, he instead drives into the middle of intersection where he finds himself marooned when the light turns red. He’s now, of course, blocking the intersection. Fool #2 is sitting in his car at the other side of the intersection and sees clearly that Fool #1 has blocked same. Does he wait for the the traffic to clear? No, of course not. Instead, Fool #2 drives into the already blocked intersection and starts blowing his horn madly. Fool #1 and Fool #2 trade insults while traffic from every direction grinds to a halt. If this madness could be expressed as a mathematical equation it might look like this: F1 x F2 = F² = UCʰ i.e.Where F1 (Fool #1) meets F2 (Fool #2) the result is UCʰ (Utter and Complete Chaos). I call this the Theory of Relative F#ckery or the Jackass Theorem.

4. Reckless overtaking: One of my fondest memories is of driving my mother to work early one weekday morning when a delivery van driving at top speed pulled up behind my car blowing his horn madly and gesturing for me for me to get out of his way. He flew around my car as soon as he could, giving me a dirty look as he raced by, and just missed my bumper by inches. Then, tyres squealing and engine revving he turned sharply onto a side road… and ran head first into a driver coming out of that road. Never mind that my mother (a God-fearing Christian) was in the car, I had to come to a complete stop, roll down the window and shout (gleefully) to the driver at the top of my lungs: “Damn assssss! Yuh shoulda dead!” Its incidents like that which prove that there’s still a little bit of justice in the universe.

5. Driving too slowly: Fren, is it that you’ve failed to notice the long line of completely exasperated, horn-blowing drivers behind you? Or is it that you (or your passengers) are sightseeing? Are you lost, or are you driving Miss Daisy? Whatever the reason, either speed it up or get the hell out of the way.

6. Driving too fast: Fren, this is not Dover Raceway, its Half-Way-Tree Road during peak hour traffic. And you’re not driving a modified Evolution X, you’re driving a pop-down ‘93 Toyota Corolla with smooth tyres and a broken muffler. More importantly you are NOT David Summerbell Jr., you’re just an idiot with a death wish. So either slow down or go to Dover where you’re free to kill off yourself without endangering innocent people trying to get home after a long day’s work.

8. Forcing your way into the traffic: The flip side of the scenario described above is where a driver coming from a side road who, unlike you, has no qualms about being a road hog simply drives out of the road at top speed and wedges himself into a tiny space between your vehicle and the one in front of you forcing you to slam hard on your brakes to avoid hitting him. The Bible should have had an 11th commandment. “Thou shalt not put your faith in my brakes”. If you drive out on me suddenly I may just run into your car and bruck up you and di likkle patty-pan you are driving.

9. Making a third lane where there wasn’t one before: Easily the most nerve-wracking thing you morons do. I know you have goods and passengers you need to deliver urgently but that does NOT give you the right to pull out of the line of traffic and zip down the middle of the road, effectively creating a third lane where none existed before and forcing everyone else to frantically pull out of your way. It is dangerous and it is annoying and you need to stop.

10. Taking up more than one parking space: This is how mi know seh some ah unnu buy unnu $#!&#! license. Unnu done drive bad already, don’t tell me unnu can’t even park good neither??? Wha mek yuh haffi tek up TWO WHOLE-A PARKING SPACES when you know parking space is the hardest thing to find in the Plazas at Christmas??? Cho hell, man!

11. Doing any of the above while talking on your damn cell phone