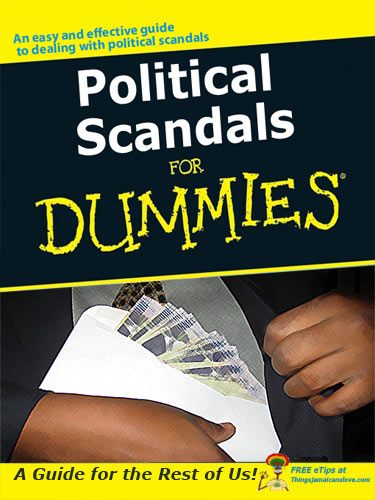 So the news has broken and your name and picture are all over the newspapers, airwaves and television. Your phone is ringing off the hook and your political enemies are calling for your head. You’ve been accused of the worst kind of skulduggery and, this time, there appears to be no easy way out. Don’t panic Mr. Minister/Senator/MP, these things happen when you are doing the nation’s work. Luckily for you, thingsjamaicanslove.com has created an easy and effective guide to dealing with political scandals – a sort of Political Scandals for Dummies if you will. All we ask is that you follow each of the steps below carefully (and that you remember us when the juicy contracts are being handed out later).

1. First and foremost - you need to go on the offensive. Immediately call a press conference and express shock and dismay at the malicious allegations being levelled at you. Vehemently deny the charges and blame said charges on political rivals trying to tear you down with baseless lies and propaganda. Vow to get to the bottom of the matter and threaten legal action against those who have defamed you.

2. At the press conference make sure to have persons on the podium with you who will add to your credibility – fellow members of government, elder statesmen, your wife, kids, pastor and your 4th grade primary school teacher if necessary.

3. Use the media to your advantage. Have party hacks and close friends write letters to the newspapers affirming your innocence and purity of character. Have other associates write op-ed pieces in the papers expressing outrage at the charges, questioning the validity of the evidence against you, and putting forth alternative explanations of the law surrounding the matter. Make sure they also go on the radio talk shows and defend you at every opportunity. Remember there are always people who will believe whatever nonsense they see or hear in the news media, simply because it was in the media.

4. Most importantly, do not panic. Remember, no matter how much irrefutable evidence is piled up against you, the key is to concoct a story and stick to it. It doesn’t even have to be a good story just so long as you are consistent. If your story is that little green aliens came down from space and stole that money from the Constituency Development Fund then work with that. Never let yourself be distracted by the facts.

5. Accuse the media of bias and scandal mongering. Say this is all a concoction of the opposition party. Stick to your story.

6. Use delaying tactics. File lawsuits against your accusers. Say you are awaiting the results of an investigation you've ordered into the matter. The longer you keep this going, the more likely it is that the public and the media will lose interest.

7. Find a fall guy. Anyone will do really – an assistant, a junior minister, your lawyer - just as long as they have some connection, no matter how tenuous, with the matter and don’t have the resources or the public profile to effectively refute the allegations you’ve made against them.

8. Strenuously resist any attempt to force you to give details of what actually happened. The more the public is kept ignorant the more likely they are to believe your version of the facts.

9. Appoint a commission of enquiry. Pack it with party loyalists and your close friends. Give them terms of reference so wide that it will keep them busy for two years and make them (and the public) forget what they’re actually supposed to be investigating.

10. If the opposition calls into question the integrity of the members of the commission then so much the better. The whole process will be delayed for months as suits and counter suits are filed; all while the whole matter fades into obscurity.

11. Accuse the media of bias and scandal mongering. Say this is all a concoction of the opposition party. Stick to your story.

12. Whatever you do, do NOT allow the Contractor General to get involved. The man eats politicians like you for breakfast.

13. If damning new evidence comes out that you cannot avoid, call another press conference and offer a public apology. Say you made a mistake but had no evil intent. Remind people that you are a devout Christian and invoke the name of God as often as you can. Quote from the Good Book. Be extremely vague about what you are apologizing for but still offer to make amends. Cry a little.

Note: This is a desperate and highly dangerous manoeuvre and should be used carefully. Some people will assume that your apology means you’re actually admitting that you’ve done something wrong. Use only when your back is against the wall.

14. Resigning is the very last resort and is almost never done. If you must resign, make a meal of it. Call yet another press conference. Appear aggrieved but resigned to your fate. Say you are stepping down to protect your family, your good name, and the proud tradition of integrity and accountability that has made Jamaica such a great democracy. Cry a little. Make yourself out to be the victim. Trust us, Jamaicans love an underdog and will forgive you immediately. If all goes well, you should be able to return to office within the year.

Remember: this the Nuclear Option. It is almost never done and you do NOT want to be the guy to set a precedent that Jamaican politicians should resign for a little corruption.

15. If you can avoid the extreme measures outlined above you will be well ahead of the game. Just stick to the plan and continue to accuse the media of bias and scandal mongering. Say this is all a concoction of the opposition party. Stick to your story.

16. Use your influence to see to it that your accusers are demoted, reassigned, transferred or forced to migrate.

17. Bring up long-forgotten scandals relating to the opposition party and say they have no moral authority to accuse anyone of anything. (TJL is a big fan of this tactic. It confuses the issue and, because everyone knows the other party is just as corrupt as yours, it will call their motives into disrepute and make the whole business so distasteful to the public that they will refuse to pay it any further attention).

18. Have the Commission of Enquiry come back and say their findings are inconclusive.

19. Allow the public to slowly lose interest. In due course, the media will find another scandal to worry about and this will draw attention away from you.

21. In years to come when you’ve become an elder statesman and your reputation is once again pristine, should anyone should ask you about the scandal, the correct response will be to express great surprise that they didn’t know that you had been cleared of all charges and that the Commission of Enquiry had declared you completely innocent.

How to Get Rid of Dust Allergies