Calling to Women as They Pass by on the Street 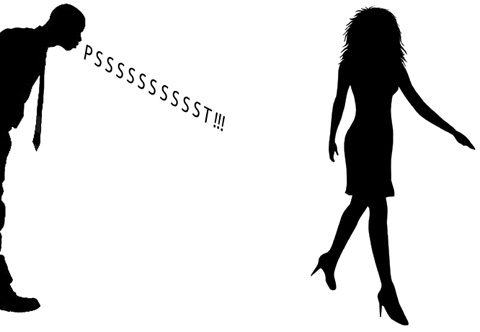 Like football, cricket and drinking white rum, calling to women as they pass by on the street is something of a favourite pastime for Jamaican men. Let’s take as an example the experience of an attractive female friend of mine who recently had car trouble in New Kingston. While sitting in traffic her car had made a strange coughing noise and immediately shut off in the middle of the road. My friend is not mechanically inclined (she says she thinks the car had a heart attack) and had forgotten her cell phone at home so she had no way of calling a mechanic. Being the intrepid sort, however, she decided to lock her car and walk from Knutsford Boulevard to Old Hope Road where her mechanic was located. She describes that walk as one of the most “intriguing” of her life. The number and variety of comments that were directed at her by bus drivers, vendors, taxi men, construction workers and just random men sitting on walls was astonishing. She shared some of the more memorable comments with me:

“Psssssssst…” My friend says that she appreciates that “psst” is a common way of getting someone’s attention, but she wondered exactly how imitating the sound of a tyre losing air had become an acceptable way of calling to a lady on whom you (presumably) wanted to make a good impression. She says she would have preferred if the gentleman had simply said “Excuse me, Miss. May I have a word with you”. After I finished laughing, I told her to get real.

“Baby ah would tek a struggle offa yuh frame” My friend found this comment a tad disturbing. She got the gist of what he was saying (Baby, I’d like to make love to you) but what precisely was he planning to do to her frame? And why exactly did it involve “a struggle”?

“Baby yuh phat like a mudfish” My friend found this comment deeply offensive until I explained that she wasn’t being called overweight and, in fact, the speaker was expressing appreciation for her curvaceous figure. I couldn’t entirely explain the mudfish part, because I don’t understand it myself.

“My girl mi love yuh like cook-food” My friend says this one made her crack a smile. She has long known that the closest things to a Jamaican man’s heart are his car, his belly and his mother. In that order. She therefore understands that when a man suggests that his “love” for her is on the same level as that of his love for food, then this is praise of the highest order. She claims that if he had said “Baby mi love yuh like mi new Benz”, she would’ve have married him on the spot.” I rather doubt it.

“Baby I woulda stan’ up firm inna yuh life like statue” My friend says that she assumes that this was an attempt by her suitor to describe how faithful and dependable he would be if she were to return his affections. She says, however, that the effect of his declaration was diminished by the fact he was also grabbing his crotch and making thrusting motions with his pelvic region at the time.

“Baby you @!#&! phat eeh!” My friend found this comment disturbing and insulting and has asked me to use this medium to advise Jamaican men everywhere that she is the owner of a licensed firearm and if she ever hears these words again she may not shoot to kill but she will surely seek to maim/cripple.

“Darlin’ yuh round and brown like a fry dumpling” My friend says that as a matter of principle she gave the taxi driver who made this comment a disapproving glare even though deep inside she wanted to laugh. She has, however, made the comment her status message on Facebook and Blackberry Messenger.

“Brown sugar, come mix mi lemonade nuh” My friend says she laughed in spite of herself when she heard this invitation. Alas, her laugh seemed to only embolden the construction worker who proceeded to observe that her skin was “smooth like baby bottom”, that her teeth were “white an pretty like chalk”, and if he ever had the chance he would lock her up “inna mi stabbin cabin” with “a crate of Jagra and some chineybrush” to give him stamina and give her “two dozen likkle African pickney”. She politely declined the offer.

We have 9 guests and no members online